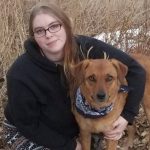 April Neeb moved back to Colorado in 2018 after spending several years in Erie. She grew up with a Golden Retriever named Sugar, a Chow Chow German Shepard mix named Flower, and cats Yonder, Miss Kitty, and Spike.

During her high school and college years her family owned a farm, home to creatures of all shapes and sizes! She preferred studying outside to the soft sounds of clucking and quacking. April hopes to own her own farm someday, but in the meantime she’s looking forward to her career in pet care, being a foster mom and donating her time to animal advocacy whenever possible.

After college, April adopted two rescue pups, litter mates Addy and Ellie. They live together happily with five cats, three snakes, and two geckos! April worked in a daycare setting, where she gained significant experience managing canine play groups, where she learned a lot about behavior and made great friendships. Soon thereafter, April joined the Care Team at Poochy Doos. “Poochy Doos is a wonderful company that shares my work ethic and values, said April. “It’s the perfect place to continue my work with animals!”

April loves her diverse fur family and enjoys digitally drawing and painting them in her spare time. She’s also been known to make the occasional crochet craft resembling family pets. She has high hopes and ambitions for her work, and is even aiming to incorporate her art into her practice someday. Her other pastimes include hiking, writing, baking, and training her pup Addy to be the best girl she can be!

April is a Fort Collins Pet Sitter, Dog Walker and Trail Guide. Poochy Doos, LLC is proud to have April as a part of our professional pet care team!