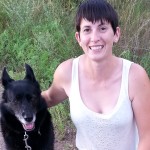 Sloan Foley grew up in upstate New York and moved to sunny Colorado in 2008 where she quickly fit right in to the active, pet-loving community of Fort Collins.

Her love of animals grew quite literally from a little bug – keeping a prized palmetto bug comfortable, if not spoiled, in a “5-star” shoe box as a little girl. Soon there were gerbils, mice, leopard geckos, turtles, frogs, dogs and cats…and on and on!

Her love of animal care, as a career, blossomed when she was hired on at the equestrian barn where she was taking Western and English riding lessons. Her position at the facility deepened her knowledge of horses, dogs, chickens and even cows! In 2009 she adopted her first dog and in 2010 her first horse. Sloan quips, “If you swing by my house, you’ll find two dogs, two horses, four ferrets and their rescued girl, Sloan.”

Sloan also has a great passion for Holistic Health Care and has completed her Associate’s Degree of Applied Science in Holistic Health at FRC. Sloan continues expanding her knowledge of various holistic health care modalities as they relate to therapeutic animal care. Sloan has also volunteered her time at Animal Rescue of the Rockies and Hearts and Horses, as a foster mom.

In addition to pet sitting and dog walking, she enjoys reading, writing, hiking, trail riding and traveling. Says Sloan: “I am looking forward to meeting all the wonderful pet parents in Fort Collins who utilize the great pet sitting services offered by Poochy Doos!”

Sloan is a Fort Collins Pet Sitter and Dog Walker and Poochy Doos, LLC is proud to have Sloan as a part of our Professional Pet Sitting Team.